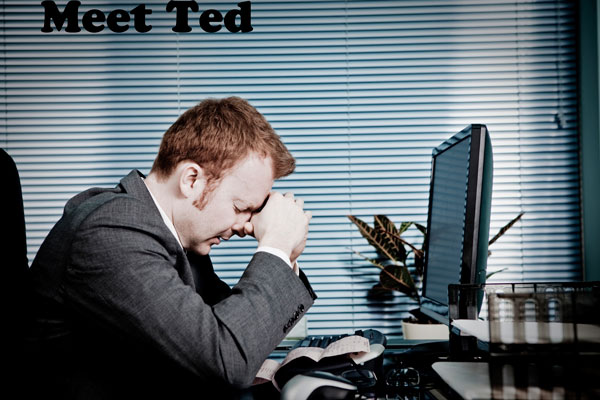 
The Canada Revenue Agency is, of course, the federal government department responsible for collecting income taxes, along with a myriad of other revenue sources. Given their mandate, though, it may seem odd to some a person's name is part of their asset inventory. Unfortunately, however, they do. If your name is "Ted" you have my sympathy. The CRA owns you.

How the CRA gained ownership of everyone named Ted is a long, convoluted story.  According to this report by the CBC the strange situation began in the late 90's during the birth of electronically filing your taxes, or "e-filing" as they still call it.

A Ted is Born

To ensure the security of its new systems, the CRA sought and received a number of trademarks in relation to its e-filing initiative. One such trademark was the word "EFILE" which makes sense considering this was the name of the service they were offering. The French-Canadian equivalent of Electronic Filing, however, is "Transmission Electronique des Declarations"; or TED, for short. So the CRA, demonstrating proper due diligence, trademarked the name TED.

If your name is Buddy, or Jim or Bob, you probably could have gone your whole life without knowing that factoid about poor old Ted. With the federal government's penchant for unintended consequences, however, if you have a business interest in the name Ted, you may be in for some paperwork. Just ask the makers of Coca-Cola.

When Coke introduced their "personalized" pop-cans to the market, one of the names selected to be used, based on its popularity in Canada was, you guessed it; Ted. This forced the soft drink bottler to apply to the CRA for the use of its TED trademark, so they could add the name to their new line of labels. In 2015, the CRA agreed to allow Coke to use Ted for their promotion, providing the beverage maker ensured the CRA was not in any way identified with being in collusion with the cola company.

Ted Talks with the CRA's Blessing

Another Ted also ran afoul of the CRA's tricky trademark. Years before what those in the department call "The Coke Incident" the popular American docu/reality/speechifying program, "Ted Talks" was also embroiled in a trademark issue with the CRA.  Although permission was also granted to the TV Ted, approval is not guaranteed. In fact, the Industry Minister is on record for denying at least two companies the use of their precious Ted trademark. They have, however, provided approval to an American video game company and a Calgary-based petroleum company to use Ted for their own purposes, in addition to the Coke and Ted Talks examples.

What's in a name?

For all the Teds who read this, take heart. Although "Revenue" is their middle name, the CRA does not receive any for their Ted-related trademark approvals.