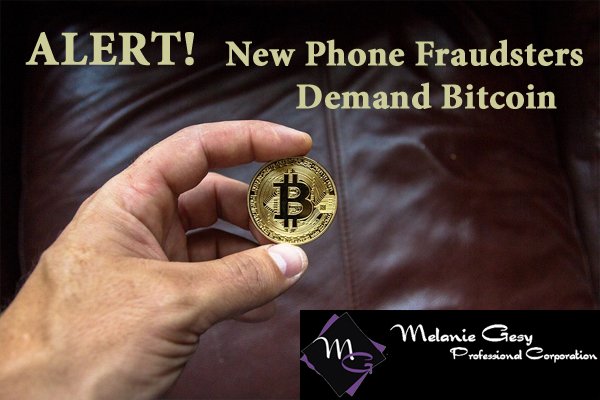 Scammers are asking for new things

Learn how to spot one


The first time we warned people via this blog about phone scammers claiming to be with the CRA was way back in October of 2015.  Back then, a rash of overly-aggressive, fake CRA representatives were calling people to threaten legal action, even prison, if they didn't provide credit card numbers to pay non-existent tax arrears.  The targets were often vulnerable seniors who are more easily intimidated by such practices than the more media-savvy youth.

Just over a year after our first warning blog, on November 10th 2016, we issued a good news piece about the arrest of a gang of phone fraudsters in India which appeared to reduce the scam phone call complaints considerably.  We finally got a reprieve from the menacing calls as the RCMP reported complaints about aggressive callers with thick foreign accents had been reduced to a fraction of what they had been.

Then Things Got Worse

Unfortunately, on November 8th of 2017, almost exactly one year later, CBC News was again warning people of more fraudulent phone calls similar to the previous scammers. This time, however, rather than trying to get people to give out their credit card information, they have a new demand. They insist people go to a Bitcoin ATM to transfer funds directly.  The story revealed how "dozens of victims" in Ontario's York region were swindled out of an estimated $340,000. These scammers also demand gift card purchases in lieu of Bitcoin transactions. The TV show, W5 featured a great report on this scam, even going to India to get to the bottom of it which can be found here.

"They're very convincing and they keep at it,"

One victim, who was taken for $12,000, claimed she initially doubted the scammer on the phone but was worn down by the fact the caller appeared to know a lot of personal details about her. She had never even heard of Bitcoin and had been told it was a machine used by the CRA for collecting delinquent taxes.

Bitcoin Scammers on Our Doorstep

Unfortunately, it appears this same scam has come to Alberta after a report appeared in the Sherwood Park News with warnings issued by Strathcona County RCMP. They advise people to simply hang up the phone if they get an aggressive caller as this is not the CRA's practice. If you have inadvertently revealed any of your personal information to these people, they recommend alerting  the RCMP with details of the encounter.

Review: Signs a Caller is a Scammer

What to do if they target YOU